Definitely one of the clones we like to work with and grow the most, selected around the year 2000, now presented in its "S1" version, crossed with itself so that you can enjoy this selection as much as we do; originally from Sensi Seeds Jack Herer. Sir Jack is a robust plant, which helps keep the weight of its large flowers. With an elevated level of resin, it is highly recommended for performing extractions, producing a super high quality "Ice-O-Lator". With Sir Jack we recommend monitoring the humidity of the room, since the density of its flowers, with a high relative humidity, can potentially cause Botrytis to appear. But if there is something worth highlighting about Sir Jack is its taste and effect, which has granted it multiple awards throughout its career, with a clearly marked incense and lemon flavour, which lingers on the palate, being a difficult taste to forget, like its effect, strongly brainy, which leads to a more Indica-type body feeling, without being disabling. This strain is not recommended for novice smokers. 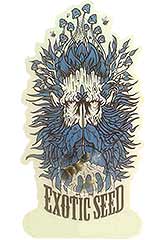